He Outran Cancer. Now He Fuels Others With Hope.

He Outran Cancer. Now He Fuels Others With Hope. from Fingerpaint Marketing on Vimeo.

One would think that Seth O’Brien has mastered the art of being in two places at once. A doting husband, dad to two toddling boys, Certified Prosthetist, sports-fiend and triathlete, it’s a wonder he has any time for himself at all.

But O’Brien has a fierce drive that would put any professional athlete to shame. He has something to prove; Not to anyone else, but to himself.

O’Brien lost his right leg to cancer 10 years ago, and he refuses to let that prevent him from achieving his goals or, what’s more, slow him down. 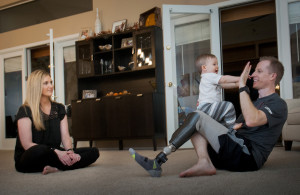 “I refuse to let my challenges define what I can’t do,” O’Brien said. “They are opportunities for me to prove what I can do.”

That’s why he’s training for his fourth triathlon, the Life Time Tempe Tri, a race that sees competitors start and finish at Tempe Beach Park.

Growing up, sports were the musical notes to which O’Brien’s heart would beat. From an early age, he played baseball, football and soccer. In fact, he was so good, that as the kicker for the Sabino Canyon High School football team in Tucson, Arizona, he went on to play in two state championships – and win one.

In college, O’Brien continued to play in recreational leagues, while taking up running, mountain biking and snowboarding. A media arts and audio-engineering major at the University of Arizona, O’Brien put his education and vivacious personality to good use by becoming a radio personality for a local radio station in 2002.

Four years later, O’Brien was diagnosed with synovial sarcoma, a high grade soft tissue tumor in the arch of his right foot. It’s one of the rarest forms of this type of cancer and it is most common among teens and young adults.

His doctor said there was no guarantee that surgery to remove the tumor would completely extract all of the cancer cells, kindling the possibility that the cancer could return. His best chance, if he wished to maintain his highly-active lifestyle, was to amputate his leg, just below the knee.

At 24 years old, O’Brien found himself at odds with his new state. The simplest of tasks, like walking, were grueling, painful and seemingly impossible. To top it off, O’Brien was put on a rigorous chemotherapy regimen, which impeded his body’s healing process for five months after his surgery.

At the end of his chemo treatments, O’Brien weighed just 95 pounds. 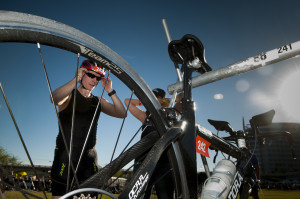 “Here I was, 24 years old, wanting to get back to snowboarding and playing sports, and I couldn’t even walk down the block without being in excruciating pain and getting blisters all over my residual limb,” O’Brien said. “I decided there had to be something better out there.”

And better he found.

O’Brien decided he needed to change course. Not only for himself, but to help the lives of others who may be going through the same challenges. He moved to Los Angeles to pursue a graduate degree in prosthetics at California State University, Dominguez Hills. After completing his residency in San Antonio, Texas, he moved his family back to Arizona where he joined the Mesa-based Artificial Limb Specialists.

As a board certified prosthetist and clinic manager at Artificial Limb Specialists, every aspect of O’Brien’s job is a harmonious blend of emotion and science. O’Brien treats patients with custom, high-tech prostheses and assists amputees in exceeding even their own expectations, physically and emotionally. He manufactures custom artificial limbs in house and tests new technologies on himself. As a fellow amputee, he knows the joys of finding the perfect fit; He’s happy to be the “guinea pig.”

The road to Tri

In 2014, O’Brien attended a paratriathlete camp and that’s where he got bit by the tri-bug.  Wishing to cross another feat off his bucket list, he trained for just six weeks before completing the Life Time Tempe Tri that year. Seth recalls only one thing about completing his first triathlon. 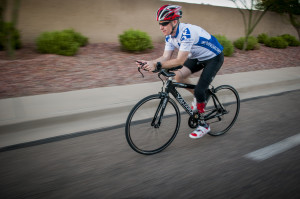 “Running a marathon as an amputee is about as brutal as you can get on your limb, even with great fitting prostheses that keep me going and make my multi-sport demands possible,” O’Brien said. “But being able to recover from the trauma of running while still training in the pool or on a bike means much less down time.”

O’Brien hopes to one day have an Artificial Limb Specialists Tri Team, especially since more of his patients are showing interest after the recent inclusion of the paratriathlon in the International Paralympic Committee’s 2016 Paralympic Games in Rio de Janeiro.

Physical benefits aside, O’Brien describes his active lifestyle as a way of attaining normalcy, and he encourages his patients to do the same.

“There is nothing that gets you back to feeling ‘normal’ like athletics,” O’Brien said. “I think trying a triathlon is perfect for amputees wanting to take that next step in conquering their disability.”

And there’s research to back it up. Studies show that daily physical activity for parathletes not only enhances their overall health, but also improves their self-esteem, peer relationships and quality of life.

O’Brien credits his family, his wife Shayla and their two little boys, for providing a priceless support system and for offering him motivation when training gets tough. During race time, he looks to the close-knit triathlon community and the possibility of inspiring someone else to conquer their challenges, to push him to new heights.

“Sometimes all it takes is that one person to think, ‘Man, if he can do it, then why shouldn’t I?’” he said.