Fingerpaint Named Agency of the Year at the 2019 Manny Awards

The agency also took home awards for Best Nonbranded Campaign, Best Medical Device Campaign, and Best Professional Campaign – Web, sweeping all of the categories it was nominated in.

“This is a tremendous honor and is a testament to our people-first culture, where the most talented people come to do award-winning work,“ said Ed Mitzen, founder of Fingerpaint, who built the company on the foundation that if you put your employees first, they will produce the best work on behalf of their clients. “In each category, we were nominated along with some of the best in the business.”

The Manny Awards annual gala event celebrates creative excellence in healthcare advertising and communications. More than 600 industry peers joined Med Ad News in honoring winners across 30 total award categories. Manny Award nominees were voted on by industry peers and an expert panel of MedAdvocates, along with the editors of Med Ad News.

About Fingerpaint
Reset your expectations of a marketing agency. Independent by design, with integrated talent across Saratoga Springs, New York; Conshohocken, Pennsylvania; Phoenix, Arizona; and Cedar Knolls, New Jersey, Fingerpaint is committed to creating and executing meaningful brand experiences that are never paint by number. 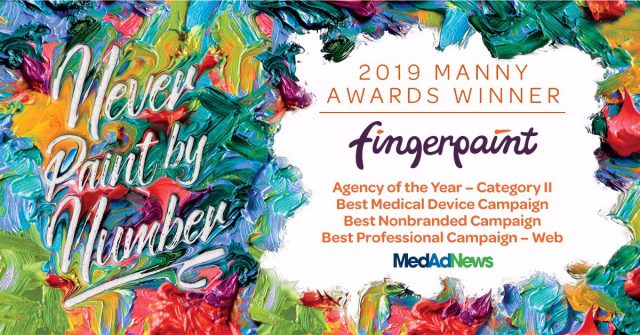