Fingerpaint, in Partnership with The Alliance for Positive Health, Urges Americans to Protect Themselves Against Sexually Transmitted Infections with Eye-Catching Valentine’s Day E-Cards

In an effort to spread protection, not infection, the initiative promotes awareness on the side effects of sexually transmitted infections

SARATOGA SPRINGS, N.Y.  – Today, Fingerpaint, a national full-service health and wellness marketing agency, in partnership with The Alliance for Positive Health, launched a provocative campaign aimed at bringing awareness to the alarming increase of sexually transmitted infections across the country. The campaign, “Protect Valentine’s Day,” features sharable, thought-provoking e-cards that bring-to-light the side effects of the most common STIs, and encourages people to know their status by getting tested. 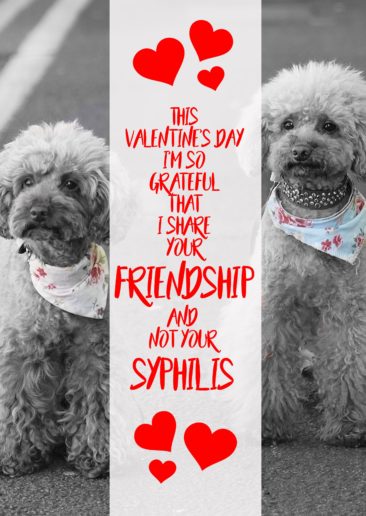 The campaign is launching during a holiday when millions of people are already thinking about sex. The cards feature greetings such as, “You’re the genital itch, I just can’t scratch” and “This Valentine’s Day, I am so grateful that I share your friendship and not your syphilis.”

Fingerpaint partnered with The Alliance for Positive Health, an organization that works to reduce the impact and incidence of HIV/AIDS and sexually transmitted diseases, as part of a pro-bono initiative based off the findings that STI rates are hitting an all-time high in the United States. Last year it was reported that there were 2.4 million cases of syphilis, gonorrhea, and chlamydia in 2018.

“Valentine’s Day is an appropriate time to remind people about the importance of taking responsibility for their sexual health,” said Ed Mitzen, founder of Fingerpaint. “Our team developed this campaign with the hope that we can bring awareness and accountably to the topic in a creative way.”

“Many people may not know they have a sexually transmitted infection (STI) because they may not have any symptoms,” said Bill Faragon, Executive Director of Alliance for Positive Health. “The only way to know if you have an STI is to get tested.”

You can view the full line of e-cards and learn more about how to protect yourself by visiting ProtectValentinesDay.org.

Reset your expectations of a health and wellness agency. Fingerpaint is independent by design, with integrated talent across five offices in New York, Pennsylvania, Arizona, New Jersey, and California. Built on a foundation of empathy, Fingerpaint is at its core committed to creating and executing meaningful brand experiences that are never paint by number for healthcare providers, care partners, and patients.

In 2020, Fingerpaint acquired 1798, a market access and commercialization firm in La Jolla, California, adding to its portfolio of services in support of biopharma customers. Fingerpaint was named 2019 Agency of the Year by Med Ad News, and in 2018, it won the Heart Award from Med Ad News for its commitment to philanthropy and social causes. Additionally, it has been on Inc. Magazine’s list of the 5,000 Fastest-Growing Companies for the past seven years. Founder Ed Mitzen was honored as 2016’s Industry Person of the Year by Med Ad News. Visit us at fingerpaint.com and follow us on Facebook, Twitter, LinkedIn, and Instagram.

About the Alliance for Positive Health

The Alliance for Positive Health is a not-for-profit human service agency whose mission is to reduce the impact and incidence of HIV/AIDS and other serious medical and social conditions. The Alliance for Positive Health is the preeminent provider of AIDS services in a seventeen-county region in Upstate New York with offices in Albany, Glens Falls, Hudson, Plattsburgh, and Schenectady.