Five cheers for Chris O’Brien on his five-year anniversary with Fingerpaint! Chris is part of our Interactive team, and he recently relocated from our Saratoga Springs to Villanova. In honor of this exciting milestone, we asked Chris to reflect on some of his most memorable moments as a Fingerpainter.

I remember being confused by all of the acronyms people were throwing around. And how loud it was—I quickly learned good headphones was a must.

Yes, for the most part. For my first few years at Fingerpaint, I was the only motion graphics/video editor. Now, I no longer play that role alongside being a developer, so I can focus on one skill set—though I still love tinkering with audio and video when I can. As far as what has changed, I’ve found that with new developers coming on staff over the years, doing more training and mentoring and being a source for legacy information is necessary.

I start my day early, with a large cup of caffeine, browse emails and blogs, then I meet with the team to figure out what tasks take priority. Then I load up my Virtual Machine, finish where I left off the night before and push any uncommitted changes. Our digital producers do a pretty good job at keeping us out of meetings, but we still get sucked into them. For the most part, I’m writing code/problem-solving throughout the day.

Lots of fun stuff, like pulling an all-nighter at the office (imagine three developers in a small green room not meant for three people) or working off card tables in the white room. But the best memory was all of the Nerf gun wars that we had when we first moved into the Broadway building.

Don’t use gloves, and don’t be afraid to make a mess.

I’ve actually changed offices, which makes this a tough question. In hindsight, my favorite thing about the Saratoga office is the people. We work hard and play hard, and I miss seeing everyone, especially going out for drinks and hanging out with everyone once in a while.

Meanwhile, I haven’t been in the new office long enough to have a real favorite thing, other than shorts. Definitely shorts. I can wear shorts in the Villanova office. When it’s hot, I wear shorts. I think when it’s cold, I’ll wear shorts just because…shorts.

The whole “no titles” thing is very empowering. Everyone can speak their mind and input is heard. It never feels like you’re too low on the ladder to speak up and be acknowledged.

a. Are you planning to read them or should you just batch delete?

The work can be crazy. Take time to make sure it doesn’t make you crazy with it.

A keg in the kitchen would be nice…you know, one that’s not locked up all the time. 😉

Also, maybe some places to sit outside and work while it’s nice out.

Taking an Alaskan sled dog team across…Alaska? Seriously though, I have no idea. Yet. 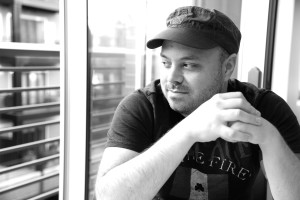 Chris O’Brien is a creative interactive developer from upstate New York who’s tools range from pencils and paints to code and solder. More specifically, a LAMP stack developer working on both front and back end development for Fingerpaint. O’Brien recently relocated to Pennsylvania to join our Villanova office.