I’m a cyclist. Not of the “race ‘til it hurts, win at every cost” variety, but I do average 100 miles a week at a decent pace, and have funny tan lines and more spandex in my closet than business wear. So I figure I can call myself a cyclist. 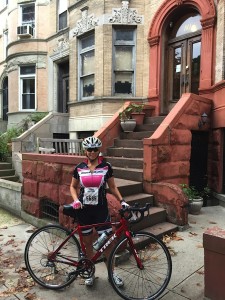 Here’s the thing about people like me. We like to view the world from two wheels. We see roads with bike lanes and want to ditch the car right then and there. Even if that road happens to be in Manhattan. Or Queens. Or Brooklyn. It was on one of my first forays to “the city” from Fingerpaint’s office in peaceful Saratoga Springs that I spotted Manhattan’s brightly painted green bike lanes and the designated lane splitting the road through Central Park. My thirst for uber-urban two-wheeled exploration began that day, as did begging colleagues to do it with me.

As luck would have it, a client meeting took me to the city last Friday, which coincided nicely with the NYC Century Bike Tour two days later. So I registered, recruited a couple of brave friends, rented a bike and packed the brightest flashing lights I could find to add to it. I figured if I could be seen, I’d live to hop a direct flight back to our Phoenix office the next day.

The biggest discoveries of my 55-mile trek through the boroughs? Neighborhoods within New York City’s boundaries are so unique and distinguished, yet they flow seamlessly from one to the next. Cars really aren’t trying to kill cyclists, pedestrians are. And there’s a tightly knit cycling community that is working diligently to make safe alternative transportation the norm in the region.

Now that Fingerpaint has numerous offices, with clients and followers across the country, we think sharing our version of “24 Hours In…” will help us all claim our new hometowns as our own. So here’s this Phoenician’s take on NYC, through the eyes of a cyclist:

If I’ve intrigued you enough to venture out on the bike lanes of NYC, rent a bike from Bicycle Habitat. They know the city, the shortcuts and safest routes, and they’ll give you a bike suitable for your riding style.

Twenty-four hours in New York City is 144 too few to experience even a tiny fraction of its grandeur, especially from a bike seat. But it sure beats not doing it at all. So get out there and when you need a break, swing by the Fingerpaint office at 50th & 3rd in Midtown. We’ll fill up your water bottles.

Michelle Olson leads Fingerpaint’s Scottsdale office and is a self-proclaimed PR nerd. Her specialty, even more than building communications strategy and staying on top of emerging media, is her ability to seamlessly blend work with her passions for travel, learning and…cycling.